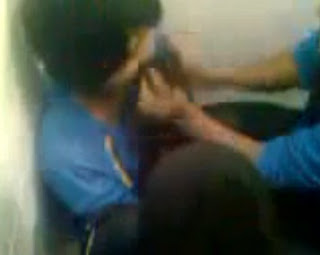 PETALING JAYA: A video, showing six students kicking and yanking the hair of a junior girl in a school in Johor, has gone viral in cyberspace again.
The case first surfaced in February, but following a court judgment against the bullies that was considered lenient, Netizens have called for the six girls aged 15 and 16 and all wearing tudung at the time of the assault to be kept out of their school and rehabilitated.

At the start of the video, the bullies pulled at the 14-year-old victim's T-shirt and slacks, then yanked her hair as she whimpered.

“Quiet, now kiss my foot, doesn't it taste good?” asked a bully as she forced her foot into the victim's face.

“If you open your mouth, I'll cut it (your tongue) off with my scissors,” said another bully.


The victim gazed at her feet when her bullies shoved her to the ground and snipped off her hair with a pair of scissors.

The victim was kicked and smacked in the back and the bullies laughed when she cried.

One bully was seen removing her socks and rubbing it all over the victim's face before stuffing it into the victim's mouth.

The victim had her headscarf thrown over her head at the end of the video with the bully saying, “That is all, thank you.”

The bullies and the victim were said to be students of a school in Semenchu, Kota Tinggi.

The police said on their official Facebook page that they had “dealt with the matter” after receiving strong community reaction.

A magistrate's court in February had reportedly told the bullies to pay RM500 to the victim and to sign a three-year good behaviour bond.

“They also have to report to the Welfare Department every month for two years,” said Batu Pahat district police chief Supt Mohammad Nor Rashid.

The case was investigated under Section 509 of the Penal Code for verbal abuse and insult.