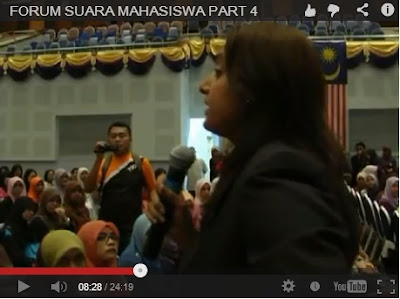 Ambiga: What She Said Was Wrong, But We Shouldn’t Overdo The Criticism

“I think we shouldn’t overdo the criticism. Some of it is downright sexist and unnecessary. Enough has been said and I hope a lesson was learned from this,” she said when approached at the Putrajaya Palace of Justice yesterday.
Ambiga was commenting on a 24-minute clip depicting a heated exchange between Sharifah and University Utara Malaysia (UUM) law student K.S. Bawani at a forum last month, in which Sharifah snatched the microphone from Bawani during a question-and-answer session before berating her.
In the video that went viral last week, Sharifah repeatedly told Bawani to listen to her, and also called Ambiga a “pencetus anarki di Malaysia” (catalyst of anarchy in Malaysia).
Responding to that remark, Ambiga said: “She is welcome to say what she wants. That’s freedom of speech. What was said was disgraceful and the public outcry is fabulous.”
Students attending the UUM forum jeered when Sharifah berated Bawani.
Social media users were quick to slam Sharifah on Twitter and Facebook for her action, with some resorting to sexist and racist remarks.
“I think the students’ reaction is a reflection of our system and this is a brainwashing exercise which should be discouraged,” said Ambiga.
She also praised Bawani for speaking up at the forum, saying: “She was articulate and had her facts. I’m sure she’ll do very well.”  -  The Sun
at January 17, 2013

Email ThisBlogThis!Share to TwitterShare to FacebookShare to Pinterest
Labels: Masyarakat